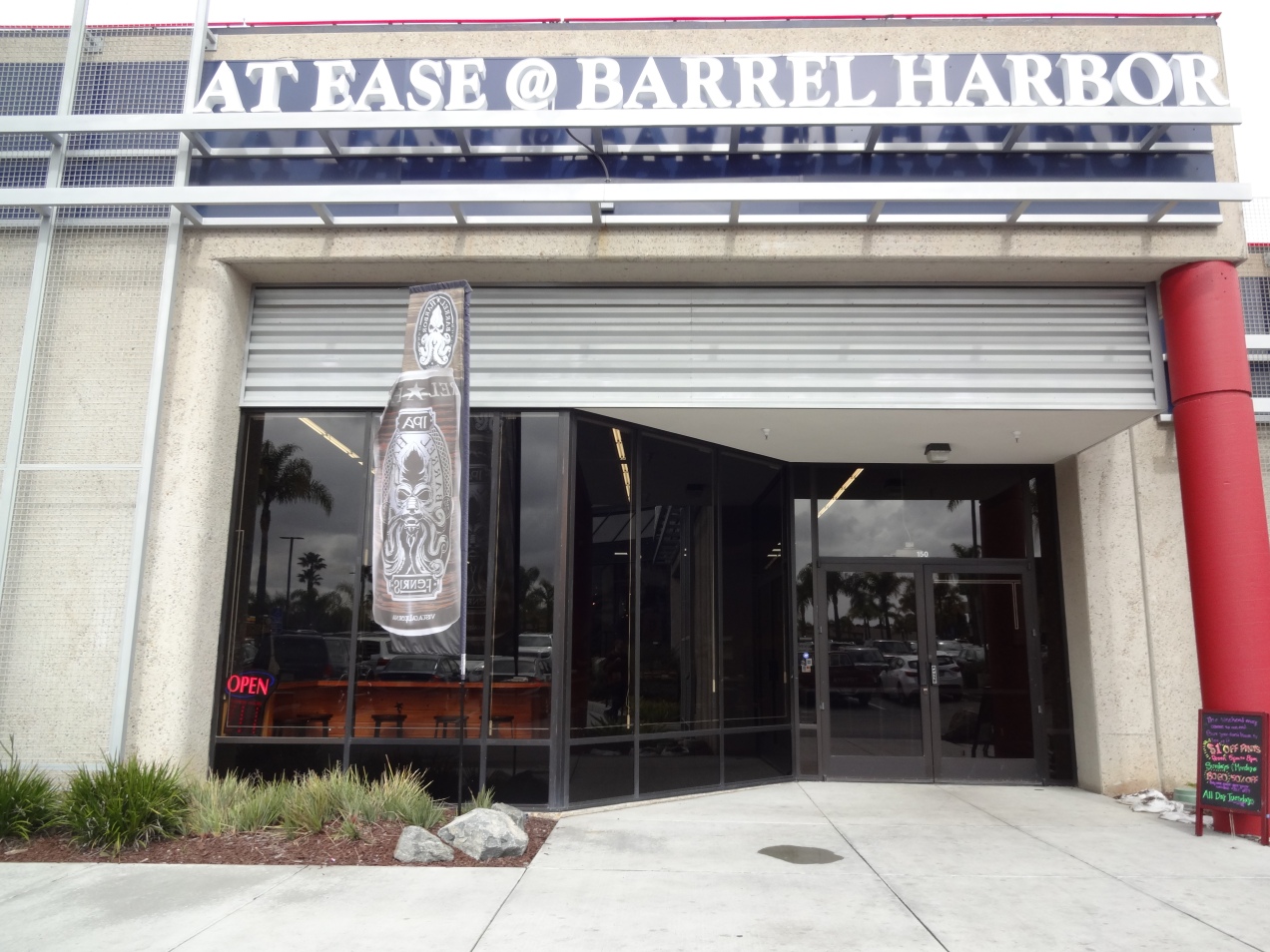 Barrel Harbor is a San Diego brewery with a great reputation and a decent local distribution.  Their original location, 2575 Pioneer Ave. #104, Vista CA , attracts all types of people.  From hipster beer-snobs, like the two pictured here, 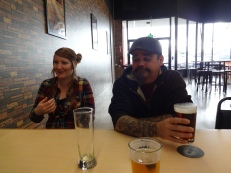 to casual one-pinters, it seems everyone likes Barrel Harbor.  And now there is a whole new plethora of reasons to like them.

In January of 2017, @BarrelHarbor opened a new location.  They collaborated with At Ease Games and popped up right next door, which gave way to one of the greatest tap rooms ever: At Ease @ Barrel Harbor. 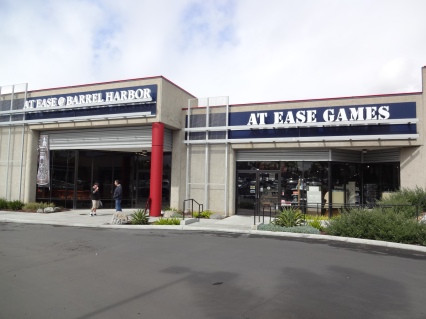 So the brewery is connected to a game shop, which i thought was really cool.  What goes together better than beer and games?  I looked around At Ease Games for a little while and my friends ended up buying some Munchkin card packs and a new Cthulhu game.  When we were done there, we headed next door to begin our Sunday of brewery-hopping.

The new location is huge.  Located at 8990 Miramar Rd., San Diego CA, they’ve got 16 taps and so many different delicious choices, I could’ve spent all day there.  Here is a picture of their menu board & current offerings: 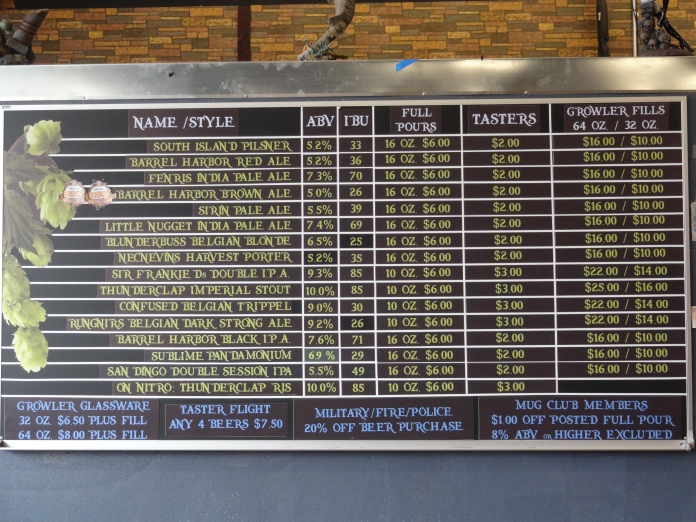 It was close to noon when I walked into At Ease @ Barrel Harbor and it was empty, save for the lone brewtender.  I wanted to start with something light so I tried the South Island Pilsner with a 5.2% ABV.  The beer was served in a tall, kinda skinny pint glass that made it seem really fancy. 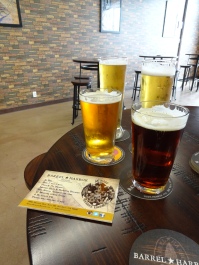 The Old Man tried the Barrel Harbor Red Ale with the same ABV.  Ck had what I had and Carie had a Blunderbuss Belgian Blonde that charts at 6.5%.

My pilsner was a golden color and it was cold and not flat.  In fact, there were so many bubbles coming off the bottom that it looked like champagne.  It tasted crisp and a bit citrusy.  I liked it a lot.

Everybody else enjoyed their choices as well.  When it was time for a second round, I wanted something harder so I sent Sean up to the bar with the explicit instruction to find me something “strong and good.”  When he came back with my Little Nugget IPA, I was not disappointed.  It was 7.4% and didn’t taste overwhelmingly hoppy.  It went down smooth and had a clean finish.  I wasn’t paying attention to what everyone ordered for their second beer so I can only say that the two I tried were top notch, tasty, & full of flavor. 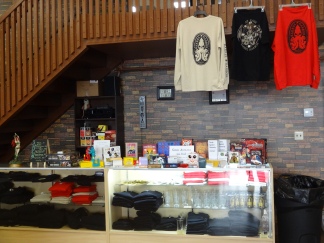 There is an area in the middle of the place where you can buy merchandise like shirts and pint glasses engraved with the Barrel Harbor logo.

They have demo games available at that counter too.  You can choose any game you want to play and if you like it enough, you can go next door and buy it.

At the rear is the game room.  This is where the experienced role-players go.  There are gaming tables set up so you can spread out and conduct a real adventure with your friends. 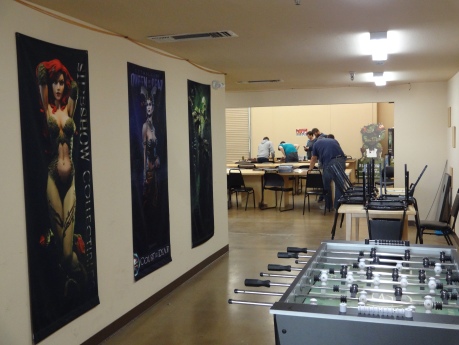 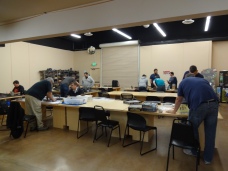 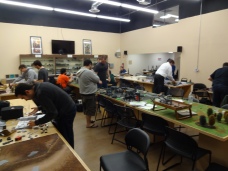 The longer we sat drinking, the more people showed up and headed to the back.  The game room is a popular addition to this brewery. 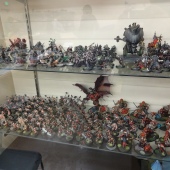 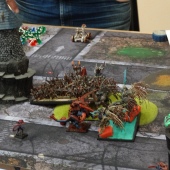 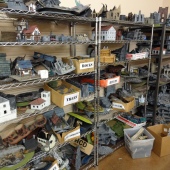 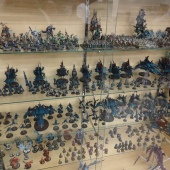 Since At Ease @ Barrel Harbor is located near a military base, they offer discounts for the service, police, & firefighters.

There are specials  listed on the menu outside like the BOGO 50% on Tuesdays. 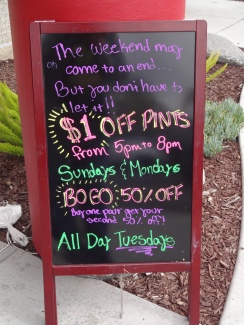 Like most breweries, Barrel Harbor allows pets and children.  The pets part I like; don’t get me started on the kids.

I loved how this location is so large.  I should’ve looked to see what the max capacity is.  It seems like it could never get too crowded and there are plenty of places to sit. 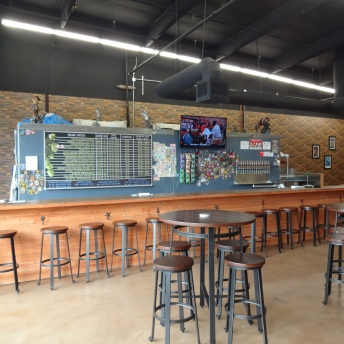 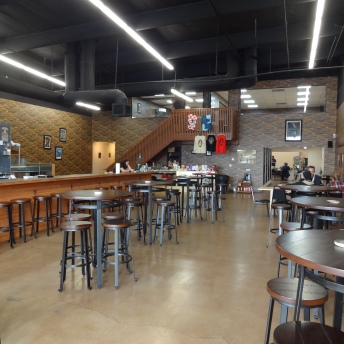 I’ve been to a lot of breweries but I have to say that At Ease @ Barrel Harbor is the one of my favorites.  The very concept of a game store connected to a brewery is genius.  This is the kind of brewery I will go back to whenever I am in #SanDiego.  It’s fun to exercise your brain with games while also killing those same brain cells with alcohol.  The circle of life.