Saturday morning, we drove right past Fall Brewing Company and the door was open.  We circled around the block so we could park and check it out.  But when we got back, the door was closed.  We checked the hours and we were about 15 minutes too early.  Not ones to sit around and wait, we went somewhere else to conduct our drinking.  But later that night, in our final stop of a day of brewery-hopping, we ended up right back in front.

This time, there was no question about it being open. 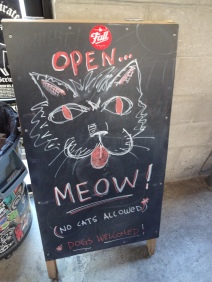 It was packed.  It was after 5:00 so the crowd was not a big surprise.  We found an open table for five and then sent the men over to order.

The beer menu at Fall Brewing is varied.  There is something for everyone.  I’m pretty sure I had the Green Hat IPA because it was a 7.3%er.  I say “pretty sure” because somehow, I failed to collect any notes about this awesome brewery.  So there will be lots of pictures and less words this time.  You’ll love it.

Here’s a clear view of the brews that they offer. 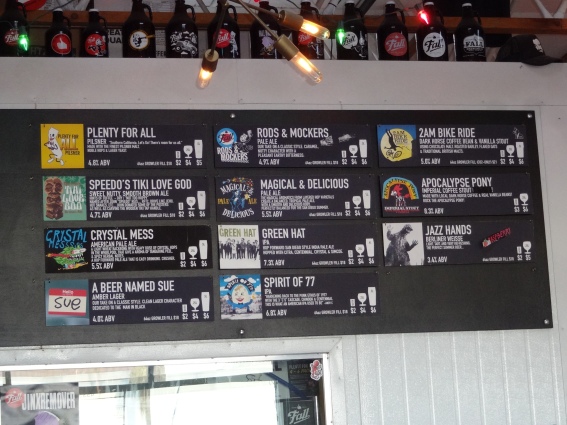 There was an art exhibit going on at the time I visited Fall Brewing called the #PlushRockArtShow.  I got a bunch of pics of the album cover art that this artist stitched together and the work is extraordinary. 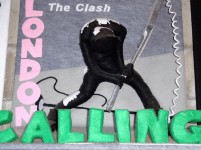 May I say who is calling?

I got to observe some cute doggies.  I didn’t engage them because I was too far gone to make sense and I didn’t want to freak anyone out – dog or human. 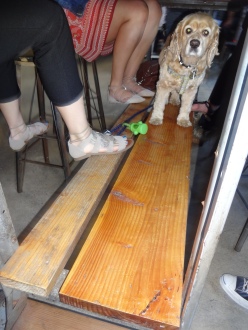 Fall Brewing has some merchandise available too. 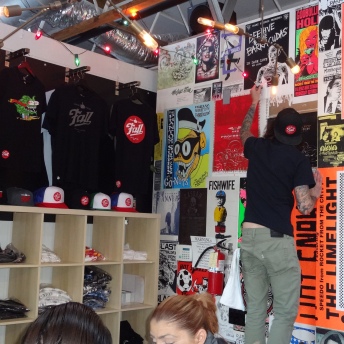 The best part about Fall Brewing Co. is the punk rock decor.  The boy’s room was covered with old fliers from shows more than 20 years ago.  That’s around the time all the millennials in the place were being born!  I’m old!

Outside food is welcome at Fall and there was a food truck out in front on that Saturday night.  It was called Anthem and it was a 100% vegan food truck!  I could’ve shit my pants right there when I saw their vegan menu.  Everything looked so delicious but I was in between meals so I didn’t try anything.

Fall Brewing Company definitely fills a niche in the San Diego #craftbeer scene.  They are worth a visit to check out the brews as well as the cool wall-art.  Say, “Hi,” to this guy for me!